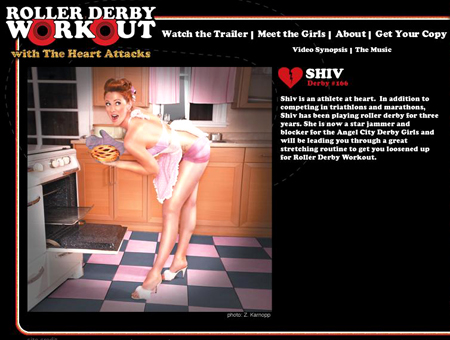 I have to give it to our girls. What to do on a rainy day when your home rink is outside and there’s no warehouse willing (yet) to adopt you? Most teams (all sports) would easily call a rain day and that would be that.

But not our ever-adaptive Betties. They rally in the 9th hour (and truth be told, it’s probably why they win most of their bouts).

I love how our Betties get stuff done! There doesn’t seem to be any problem they can’t resolve. From little stuff (rained out practice dates) to big stuff (throwing an absolutely successful outdoor fundraiser in the middle of December). To me, these things truly highlight how well they function as a team.

I often wonder what it’s like for them to be training a group of nuggets that are sure to change the tight team dynamic they’ve lovingly cultivated and achieved. This doesn’t mean it will change for the worse. But NO doubt, the team will be a different team with new members. Makes me think of the show Sister Wives (yeah, that’s right, I’m not too proud to admit watching weirdo polygamist reality TV).

In the last season of Sister Wives, there are three wives who have all been married to the same dude for like the last 16 years, and they are all about to accept a new wife into the clan. This is because their husband has decided to take on another one. They all believe and get behind this concept, but it doesn’t mean that it comes without its bumps. They believe, in the end, an additional wife will make them stronger, better, more capable, and yeah, one more set of hands can really help out with their enormous workload (three wives, two incomes, one husband and, like, a kazillion kids).

So, like the new Sister Wife who is about to get married into the clan, I want the Betties to like me. I want them to accept me. But I also feel protective of what they’ve managed to achieve before I, and all the other nuggets, arrived. I want to tread lightly and integrate at a natural pace. It’s weird because as tough and capable they are as individuals and as a team, there’s also this beautiful fragility amongst them. I so totally want to get to the point where I can be a full-fledged member of this team, and allthewhile, I want their bubble to stay protected. Does that make any sense?

Meanwhile, Back to our Rainy Day Workout . . .

The Heart Attack girls (from the Roller Derby Workout vid) were a little on the corny side (gotta love the coordinated neon bright leotard getups with matching skate wheels and laces), with their tagline for the video being, “You don’t have to be a roller derby girl to be a knockout, but it doesn’t hurt to train like one.” Alrighty, lol.

But big time props to them for producing it and getting it out there. The exercises were pretty standard, but definitely do the trick on a rainy day. And the music was actually pretty good for a low-budge production.

The workout is led by five derby girls: Shiv, Biodiesel, Go-Go, Estro Jen, and Punk N’ Da Trunk. All these gals reign from the Angel City Derby Girls in L.A., however, (except for Shiv) all of which seem not to be with the ACDG any longer.

My favorite was Punk because she was like a jacked up Barbie version of our own coach, Dita de los Muertos. I kept imagining she was really Dita in costume, sarcastically making fun of Barbie-type derby girls. As I was leg lunging, I was day-dreaming about Dita walking in on the set and kicking this girl’s ass. Is that terrible? I know derby girls are super supportive of one another, even after battling it out in a tense bout – all friends at the end. But my mind kept wandering off as I concocted some twisted derby version of Westside Story where MAK and Dita would skate in and physically/psychologically decimate the workout Barbie girls. Off the wall? It’s okay, I don’t deny it. 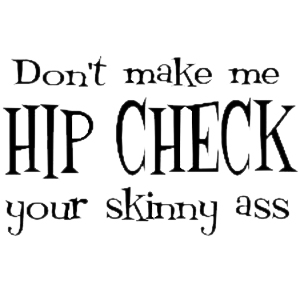 OMG! Tuesday night’s practice was magic. Not only did we get to practice whips and knocking girls on their ass, I had so much fun doing it that I wasn’t even focusing on the fact I was skating. I made it through nearly the entire practice without having to sit down. I missed the last 10 minutes (wall of Violence), but was entirely proud of getting through the one hour and fifty minutes that it didn’t matter.

This is a milestone in SO many ways that I cannot stop smiling. First of all, it means that all the strength training and repetition is paying off. I am getting strong. It means instead of skating around the outside doing my modified versions of the skills, I was in the pack! I don’t want to give any wrong impressions here. There were no Ellen Page moments where suddenly I went from not knowing how to skate to being a badass Jammer. However, I was “my own hero,” and badass enough for me. Especially since I had spent the entire day throwing up and in bed but I rallied and got myself to practice. 😀

Blocking and knocking down was so much fun that, as my girl PTS Dee says, “these hips were made for blocking.” How to describe the satisfaction of throwing a booty and shoulder into a girl and watch her fly off course? It’s waaaaaaaay better than bowling. Misfit and Hiss were awesome coaches and very patient with me. And the excitement of looking over my shoulder for another victim while hearing LOC yell, “Come on Stacy! Knock one down!” was awesome. I can see/feel how this is only the baby beginnings of an addiction, the tip of the iceberg.

My husband (Scott), son (Cousteau) and I met Storm and Dee down in Ventura at Skating Plus on Wednesday night. Dee and I showed Storm some of the whips and pushing exercises she missed Tuesday. Though, it was a much milder version (we were still sore from the night before). Cousteau even got in the mix and practiced whips with Dee.

Scott got on skates for the first time since he was eight and rocked it for his first time. When I first got back on skates, I clung to his arm for two weeks straight before I could even stand on my own. Not Scott, even though Frankensteining his way around, he was up and on his own cruising around the track for two hours. I give credit to his skateboarding for giving him a giant beginner’s bump. I’m thrilled that he wants to become a derby ref as well as start playing some hockey. We’re an all-urethane family now.